They came up with this idea as a semester project on which they worked in EPFL’s cryptology laboratory (LACAL). That is when their supervising professor, Arjen Lenstra, suggested they present their project to the Blockchain Summit. The team, whose project offers a new insurance system, could not have dreamed of a better outcome as their work aligned perfectly with the central topic of the Summit. 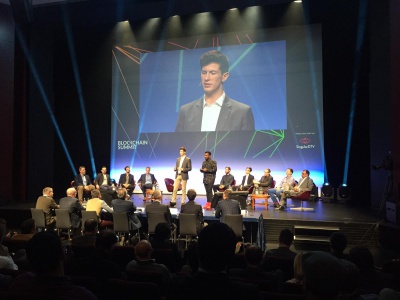 From the 100 international projects that applied, 10 were selected to compete during the Summit. Each team warmed up by giving a 3-minute speech in front of an expert jury and an alert crowd of 600 people.  The best 3 projects went on to the final stage of the competition: giving an 8-minute pitch to provide even more information to the audience. For ShieldIT, this presentation was a success as they won US $100’000 and a year in an incubator.

We have the chance to get their first reactions just after their win. “I still don’t realize what happened, I made my father cry” exclaimed Paul. He then added very pragmatically “but tomorrow I am back at EPFL”. Hugo went on to say how “emotional” he was and even admitted to having teary eyes as they really had no hope for a response when they sent their project: “We would have never done this project together if it weren’t for this competition. We learned a lot. But to be honest, we also had a lot of fun”. 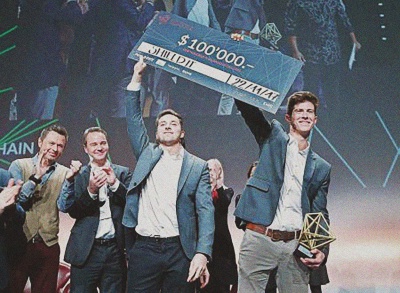 The project’s aim was to create a decentralized and collaborative insurance system based on trust between individuals brought together by a common fund. Users wanting to ensure the same item collect money in a common pot supervised by a “Smart Contract” to guaranty the item’s insurance. We can see the smart contract as the guardian of the common treasure. When a user needs insurance money from the pool, he sends a reimbursement demand to the community (which then has to accept it). Being still a student, Hugo told us he had never seen so many zeros at the end of a check, “except in video games … This is unheard of!”. After this night, Hugo and Paul are “really, really excited” for the future of their blockchain project.

For more information about ShieldIT and their latest updates, you can visit their own website here.